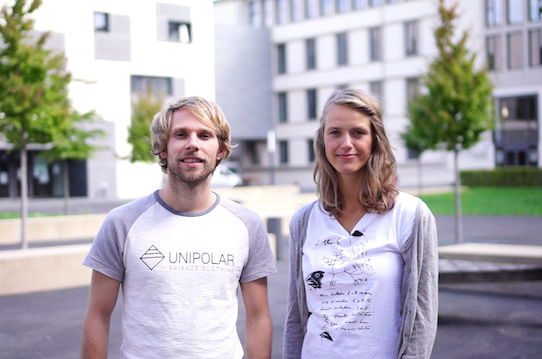 Even though Steve Kupke has a PhD in physics, he founded a startup to design scientific clothes.

Dresden. After finishing his PhD in physics at Dresden University of Technology, Steve Kupke changed his life completely. Instead of working in his field of studies, he became a designer for scientific clothes. We spoke with him about the origin of his business idea and how he realized it.

Founderella: How did you come up with the idea to create T-shirts with scientific designs?

Steve Kupke: During my physics studies I’ve seen many nerd T-shirts with equations, formulas and witty remarks. I would have loved to wear a T-shirt that says something about my area of expertise, but I didn’t want it that way. I was looking for something subtle, chic, and with a modern cut, but couldn’t find it. That’s the point where everything started.

The video of the already finished crowdfunding campaign.

Did you do some kind of market research?

I asked friends and colleagues what they like and we used the Google keyword analysis. I was checking how many people searched for buzzwords like Student T-Shirt or Nerd shirt.

What kind of designs are available?

All designs have a scientific background. The spectrum ranges from the writings of Isaac Newton, the evolutionary theory of Charles Darwin to the theory of color by Johann Wolfgang von Goethe.

Has the selection a specific reason?

We have focused on the most popular subjects in the first place, but are constantly broadening our range.

Where are the T-shirts manufactured?

I design the themes and order the textiles from a fair label from Belgium, named Stanley & Stella. They produce in Portugal, Turkey and Bangladesh. The latter country sounds bad in the first place, but the workers receive a higher wage than the average in Bangladesh textile factories, and the safety standards are complied with. This is certified by two independent organizations (Fair-Wear Association & GOTS). I’ve looked at a handful of producers, and Stanley & Stella have convinced me most.

How big is the team of Unipolar presently?

We are three. Me and my girlfriend Daniela, which acts as an advisor, and an intern.

Why did you choose to set up a business, and don’t work in your area of expertise as a physicist?

I’m just not the normal physicist. I am ambidextrous, which means that I have my rational side as a physicist, but also a creative side. The latter one I am trying now to bring forth more. Apart from that, I don’t like routine. I’m always looking for something new, for example is it really exciting to get to know the history of various subjects for new design ideas.

Mr Kupke, many thanks for the interview.