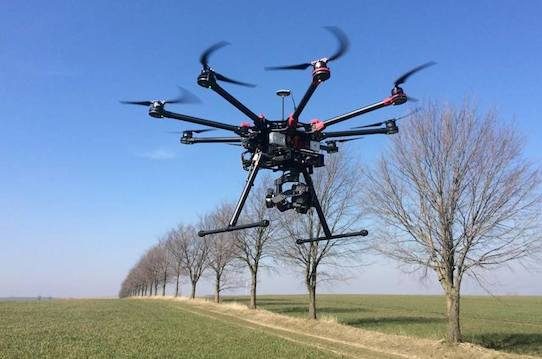 Dresden. It all began with back pain. Daniel Zenzipér (28) lay on a cot in the physiotherapy practice of Martin Göttert (34) to receive treatment for his afflictions. In doing so, they got into a nonchalant conversation about traveling. During this chat it suddenly struck them that it is especially for elderly people sometimes not easy to climb certain sights.

„There is for example no lift in the Frauenkirche in Dresden. Therefore not everyone can enjoy the view,“ says Zenzipér. That consideration was the birth of their company „Flightseeing“. Live pictures from scenic flights that are streamed by quadrocopters, and that can be viewed on earth with video glasses – that was the notion of the two men from Dresden.

But although the single components still existed, it was hitherto just a dream. „Subsequently I did research on Internet forums and spoke with experts of the scene which technology suits best,“ says Zenzipér. A crucial point was the radio frequency for the video signal. After intense tests Daniel and Martin chose a 2.4 gigahertz WLAN frequency, because it was the best way to transmit a high-definition picture.

However, flights with quadro- or octocopers do not only have technical pitfalls but also legal ones. „It is for example forbidden to fly over people. Furthermore it is necessary to keep the copter within sight,“ explains Zenzipér. Additionally there are certain restrictions that are in place in some cities. In Berlin for example a distance of 4.5 kilometers to the Reichstag and 1.5 kilometers to the airports must be kept. “This regulation limits the opportunities,” the 28-year-old says.

Nevertheless, the two entrepreneurs had aplenty to do after the completion of the development phase in the middle of 2014. Among other things they took photos at the Dresden night of the castles, they did live events at company celebrations or they overflew the spectacular Mosel bridge in the Rhineland with its 150 meter high pillars to document the work of industrial climbers.

All in all „Flightseeing“ has 70 percent corporate orders an 30 percent orders for events. Besides the live experience that shows people through the video glasses of Carl Zeiss live pictures at high altitude (two hours cost at basic price of 449 euros), the company also offers cut films that were recorded professionally with octocopters and reflex cameras.

Among other things Flightseeing took photos on the occasion of 800 years of the Dresden Kreuz choir. But that wasn’t easy at all. „Usually the copter is stabilized by GPS in the air. Within the church that wasn’t possible. To get good pictures anyway, a lot of aeronautical skills were necessary,“ Zenzipér remembers.

Even though Daniel Zenzipér and Martin Göttert started their company without borrowed capital with their own savings, they already reached the break even in February because of the multitude of orders. The revenue is less than 100.000 euros in a five-digit range. No surprise that Zenzipér and Göttert offer a positive summary of their foundation: „It’s the best we’ve ever done. But that was only possible with a good team. And that’s what we have,“ both of them say unisonous.