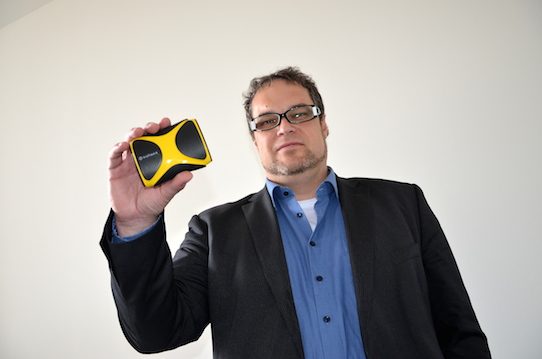 Dresden. With the Mini-Kraftwerk of the Dresden based company eZelleron everybody can charge his smartphone at any place – only liquid gas is necessary. In August the startup begins with the production.

Approximately 1.3 billion smartphones will go on sale this year worldwide. And although batteries improve steadily, at some point users need an electrical outlet. However, sometimes there is no power outlet available. For situations like this, the startup eZelleron from Dresden has created its Mini-Kraftwerk, which is essentially a fuel cell operated with liquid gas. Via USB port the smartphone is charged.

„I’ve always traveled a lot. During a trip through the USA I experienced a situation where I couldn’t charge my smartphone. At the same time it struck me that my colleagues had no problem to get liquid gas for their lighters,“ the founder of eZelleron, Sascha Kühn (42), remembers.

In this awkward predicament, the idea for his company evolved. As a materials scientist who did research on fuel cells at the university of the Saarland, Kühn had the knowledge to realize his plan step by step. But that wasn’t easy. Years of hard work were necessary. Today the market-ready product contains 27 patents.

After Kühn had completed his PhD in 2004, he founded the company 2007 in Cologne. As early as one year later he moved it to Dresden in East Germany. „One reason was that the funding from government programs was greater in East Germany. But apart from that, in Dresden the people realized immediately the potential of our business idea,“ says Kühn and adds: „I would like to say thanks especially to Mr. Nothnagel who worked back than in the economic promotion office of the city and today in the state ministry of economics. He helped us a lot to get our business started and showed us funding opportunities via the Sächsische Aufbaubank.“

This open-minded approach wasn’t everywhere the case. During his tour through the German federal states, Kühn made some strange experiences.

„A woman who works in the economic promotion department of a federal state in West Germany, which does economically very well, told us that she had no academic background and couldn’t understand our idea. She furthermore said that some days ago someone proposed to her the concept of a bratwurst chain which was more promising to her than our high-tech startup,“ says Kühn.

Dresden in contrast convinced him not only with competent contact persons and government funding but also with its renowned research institutes. „We developed a completely new technology. Therefore the many Fraunhofer institutes in Dresden were an ideal partner for us,“ says the 42-year-old.

After years of hard work the Mini-Kraftwerk will soon be available commercially. In August the production starts. 10.000 people from 92 countries who supported the crowdfunding campaign of eZelleron via Kickstarter earlier this year with all in all 1.5 million US dollar (1.12 million euro) will get the first devices for 90 euro per unit. In the middle of 2016 they will be available for all consumers for at least 200 euros.

27 employees work at the 3000 square meter large headquarters in Dresden-Leuben to realize this goal. The company plans prospectively to produce 100.000 units of the Mini-Kraftwerk per year.

Even though the focus is mainly on the US market, Sascha Kühn has recognized an emerging market in Africa as well. According to studies of the Worldbank two thirds of the African people use some kind of cell phone, more than in the US or in Europe.

„Even people in the slums who have only 35 euros to live use ten euros for their smartphone plan and six euros to charge it,“ reports Kühn.

With 80 grams of liquid gas a smartphone can be charged eleven times with the Mini-Kraftwerk.

On a continent where a continuous electricity supply isn’t available in large areas, the device could change the lives of millions of people. Additionally it could spur economic growth, because smartphones are not just used for talking but, in absence of a working banking system, also to pay at shops with smartphone credits.