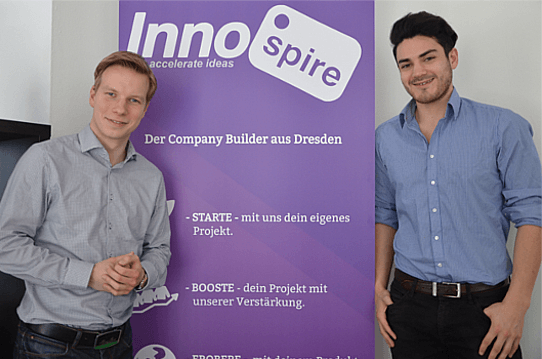 The Dresden based incubator “Innospire” wants to encourage students to start their own business.

Dresden. “Screw it, just do it.”That’s the motto of the English billionaire and Virgin founder Richard Branson. The bottom line is, facing the start-up scene: Only those who actually try a business idea, know if it works. However, in reality most people dream, but don’t act. They are already afraid to start.

The German city of Dresden is no exception concerning this regard. Especially students tend to think too long about their ideas, before they still stay inactive. But maybe the situation is changing now. Reason for hope is a project of the Dresden entrepreneur Sebastian Schulz (25). He decided to do something about the academic foundation fatigue.

A year ago he launched together with his business partner Nicolas Mesa (25) on the campus of Dresden University of Technology the incubator “Innospire” that adresses especially student founders. “Often students decide against starting a company because they are afraid of the risk of liability. Under the umbrella of our company, they don’t need to worry anymore. We develop the business model and found the startup not before it generates revenues, “says Schulz.

Although it is helpful, potential founders don’t have to visit “Innospire” immediately with concrete ideas. There is no commitment to a particular industry. “We are open and listen to everything. Together we will see if a idea makes sense or if it needs to be developed, “says Schulz.

The ones who will be admitted to the incubator, will gain access to a kind of “all-round carefree package”. “We relieve the founders from everything that’s not directly related to their product and take care of things like tax issues, the provision of servers or the follow-up financing,”says Schulz.

This service is for free. In return “Innospire” participates in the company with a share of at least ten to a maximum of 49.9 percent. “It should always remain a minority stake,”says Schulz, who has according to him good contacts to many investors for further financing.

Currently, the student incubator manages eight projects. One of these is the startup “Weltprobierer”by Bettina Kieselbach (22), who founded her company during her economic studies at the Technical University. By means of an online store and soon in stores, she sells little boxes with culinary specialties from around the world. One finds, for example, in the China box, sesame oil, rice paper and matcha tea.

“Since December, I have already sold 300 boxes. Every two month subscribers receive a new box with a different regional theme, “said Kieselbach in April. Although she has to cope with an enormous amount of work and rarely finishes work at 6pm, she didn’t regret her decision. “Firstly, it is fun and, secondly, I’m learning a lot. Purchasing, sales or marketing: All I have to look at myself, “she says.

Another startup that uses the support of “Innospire” is the company “Smart House”. “The founders are working on an online platform for smart home devices, which can be controlled among other things via radio outlets. What is more, things like the smart refrigerator that signalizes when replenishment is necessary, are part of this business, “says Schulz. Currently there is no overarching platform for these applications in Germany, the 25-year-old explains.

Despite the extensive support of “Innospire”still the question remains, if most students rather prefer to strive for a regular job, than wear themselves off in the stormy waters of the start-up scene.

“Certainly many engineers want to work for BMW or Siemens, and business majors look for consulting firms. But if they actually work there, they soon recognize the limitations. Usually there is no room for self realization. They will not only be told, what they should do, but also how to make it, “says Schulz, who has worked, among other things, at Porsche before he founded his first startup in Switzerland.