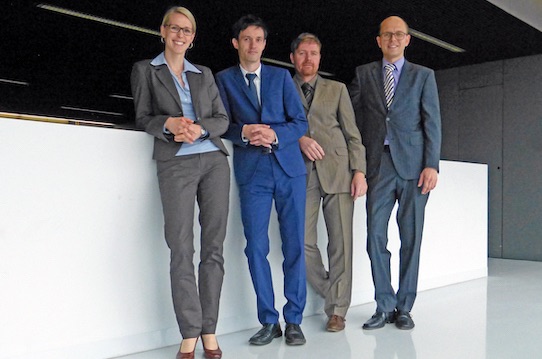 For a long time, load carriers in the automotive industry were mainly made of steel. Then the Chemnitz based startup Ligenium came along and showed that it can also be done with wood. In addition to the trend toward climate protection, the company is also benefiting from increasing electromobility and 5G factories.

Chemnitz. Everyone is talking about climate change. To combat it, Germany has set itself the goal of reducing CO2 emissions by 70 percent by 2040. However, this will not succeed with savings alone. Innovations are also needed, for example from startups.

Wood instead of steel

One startup that is making its contribution in this regard is the Chemnitz-based company Ligenium. It produces so-called load carriers for the automotive industry. These can be used, for example, to transport parts of the car body or car seats. What is special about this is that instead of steel, as was previously the case, Ligenium’s load carriers are made of wood. This makes it possible to save half the weight and thus reduce the C02 footprint. However, anyone who thinks that these are simply wooden crates stuck together is mistaken. In order for the lightweight load carriers to have the same properties as their steel counterparts, a great deal of scientific know-how from the field of mechanical engineering is required.

University research as the basis

“The simplest way to describe it is this: The carpenter knows something about wood and the mechanical engineer knows about the dynamics of steel. We bring both industries together,” explains Ligenium CEO Christoph Alt (39). He and his three co-founders previously spent a decade researching at the Technical University of Chemnitz (TUC) and developed a dimensioning basis, i.e. the specification of certain dimensions, for the calculation of wooden structures.

“Normally, no mechanical engineer hears anything about wood. We are pioneers in Chemnitz in this regard.”

The founders provided the first proof that the concept not only works in theory but also in practice (proof of concept) while still working at the university. They built a so-called skid conveyor system for Volkswagen in Wolfsburg. This is used to transport car bodies back and forth within the factory on a 250-meter-long wooden roller conveyor.

Because the industrial partners with whom the scientists worked over the years did not transfer the know-how into practice themselves, Christoph Alt and his colleagues Sven Eichhorn (43), Ronny Eckardt (41) and Angela Grimmer (40) decided to found Ligenium in 2018. “We knew there was a business model for this and didn’t want our research to disappear into a drawer,” says Christoph Alt.

In the meantime, the startup is doing great business and cooperates with many major automotive manufacturers. Since its founding, an extensive landing carrier portfolio has been created. While the load carriers here are usually half the weight of steel models, the Ligenium team in Saxony showed that even more is possible. “For a seat pallet used to get the seats for the ID.3 from Zwickau to Dresden, we were even able to reduce the weight from 140 kilograms before to 44 kilograms.” For every 100 kilometers traveled and one ton less empty weight (weight without load), half a liter of diesel and thus around one kilogram of CO2 can be saved in truck transport from location to location, explains the founder.

In addition to weight reduction, Ligenium is already contributing to CO2 reduction by relying on wood products. These act as carbon reservoirs and, when used industrially, store the climate-impacting gas for much longer than biomass that rots in the forest, for example. In the future, according to the company, there are also plans to upcycle used load carriers, i.e. rework them into new products.

Electromobility as an opportunity

At present, the wooden constructions are not only attractive from an ecological point of view.  There are also advantages when it comes to electromobility.

“With electromobility, it is becoming apparent that model changes will be more frequent than at present. Since we are able to react flexibly to new components, we can benefit from this.”

Similar to a Lego construction kit, the load carrier can be reassembled quite easily and quickly depending on requirements, Alt said.

5G radio waves are not attenuated

Even though the load carriers are wood, no one still has to worry about fire safety. For one thing, he says, there is the option of using flame-retardant materials, and for another, the wooden structure is basically quite robust. “Steel doesn’t burn, but as was seen, for example, with the World Trade Center, it loses its strength above a certain level. If, on the other hand, a half-timbered house burns, a layer of coking forms around the beam, but as long as it doesn’t burn so badly that it breaks, the structure remains intact, Christoph Alt debunks a common prejudice while pointing out another advantage of wood: “In fully automated factories, it would be problematic if the 5G radio waves were disrupted. With wood, that’s not a problem because it doesn’t attenuate the radio signals.”

Increased wood price not a problem at present

The signs thus continue to point to growth. Even the rapidly increased price of wood cannot change this. “Coniferous wood used in construction in particular has become more expensive. We rather need wood materials made of hardwoods such as birch or beech.” In this segment, the price of wood has not doubled, he said. However, there has been an increase of 30 to 50 percent here as well, he said. “We have therefore taken precautions and stocked up sufficiently,” reveals Christoph Alt. Together with his colleagues, he has set big goals for the next few years: “We want to establish our system as the new logistics standard, whether it’s transporting car parts or a refrigerator.”